For Josiah's birthday earlier this week, he requested McDonald's for lunch, 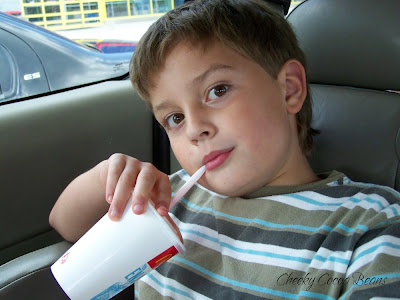 compliments of free kid's meals from VBS (whoo hoo!). This is where he got his new favorite non-birthday present toy that is now referred to as his griffin.

And apparently it's an attack griffin. 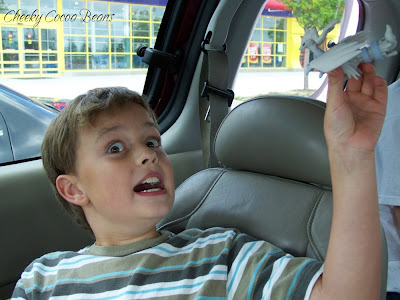 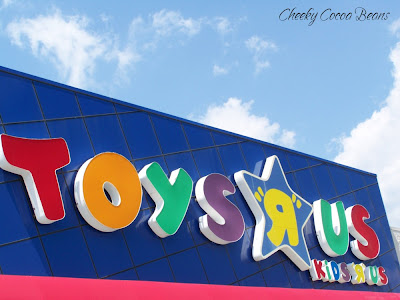 because the boy loves to spend money. (Which is why he is usually broke!)

We went to Pizza Hut for supper...with the griffin, of course. 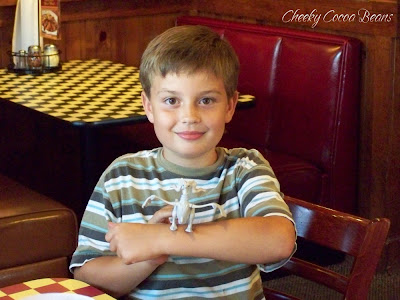 After we got back home, we had his birthday cake.

Now, let me tell you about this cake before you judge my cake making and decorating skills. He picked out the cake mix and picked chocolate frosting to go with it. He also picked the Bundt cake pan and the "9" candle to put on the cake along with nine white candles.

And...he wanted Twizzlers on his cake. He wanted to help decorate the cake with the Twizzlers, so he spelled out "Happy Birthday" with pieces of Twizzlers. He also put a ring of Twizzlers around the top and bottom of the cake, as well as a smiley face (facing him) because, of course, you can never have too many Twizzlers on your birthday cake.

OK. Now you can see the cake. 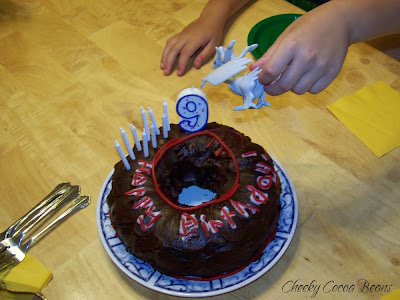 We'll go with Josiah's story line that the griffin lit the candles. 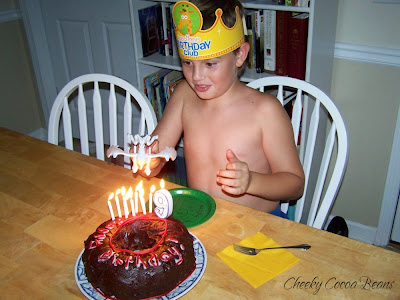 We did the singing. The griffin can't take credit for that.

Care for a trip down memory lane? 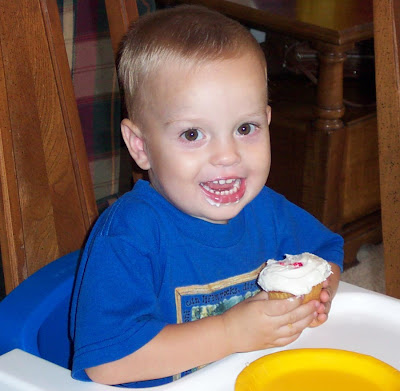 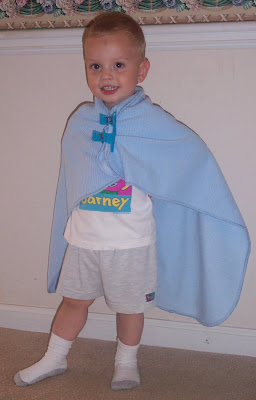 2 year old Josiah with his famous superhero (baby blanket) cape, which he called his "superhero." Please note the 80s hair clips--They were my aunt's. We still have some that have survived the years with two boys using them to fasten all kinds of costumes, props, and tents. 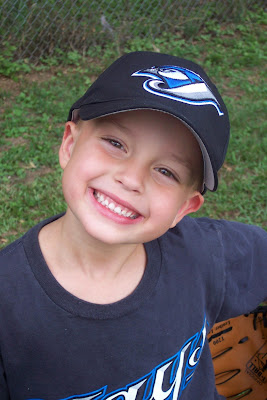 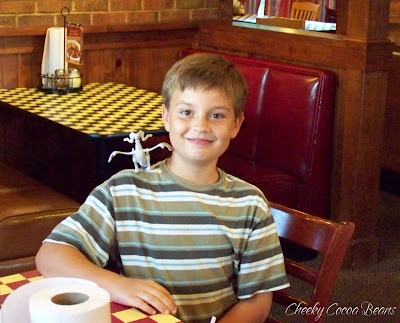 Sitting on his shoulder is a Happy Meal toy he got that day that he has renamed a griffin. I think he loves that little Happy Meal toy just as much as, if not more than, anything he got as a gift. ;)

MissusMechanic is the winner of my UPrinting sticker giveaway!

Where the wild things are

So, um, forget what I said earlier...

Or, at least, some of what I said earlier. 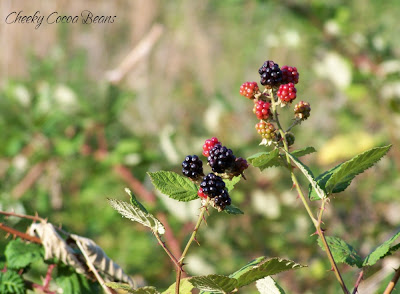 are edible. Oh, the wonders of the Internet where you can find such information.

And you can't beat the gardening book I have on my shelf that I looked in, too. I love real books. One look inside my house, and you'd know that. ;) So many books...and not enough space on our bookshelves.

So, now I can stop referring to them as "blackberries" (with imaginary quotation marks floating through my mind) and just call them blackberries...while I wait for them to grow across the fence again so we can have free fruit!
Posted by Amy @ Cheeky Cocoa Beans 2 comments:

Santa Paws and his funny elves

Click here to enter my giveaway for a chance to win 250 FREE stickers/labels from UPrinting! Giveaway ends June 23rd at 10:00 p.m. ET.

~~~
During a recent trip to Athens to visit my aunt, who is currently in a rehab facility after a bad fall... 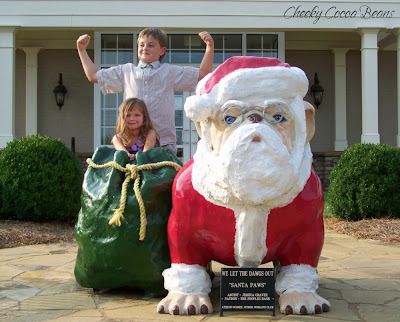 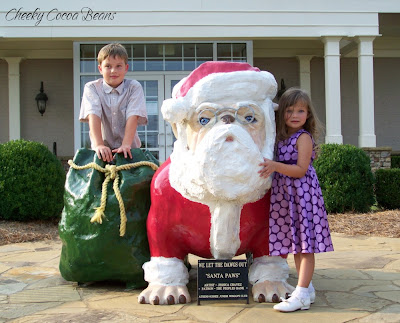 Oh, how I've missed taking pictures of sunsets! You see, my camera decided to die last month...and this time for no apparent reason, unlike last time. I'm afraid this time it might be for real. Just in case, it's sitting in a bag of rice, which is what revived it last year when it was damaged by water.

I am so appreciative of my aunt and uncle who let me borrow a digital camera they were not using! Now I can go back to taking pictures of gorgeous sunsets... 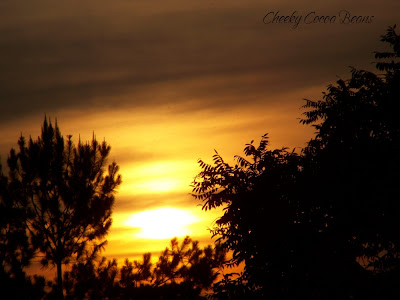 which is great because we've had some colorful ones lately. 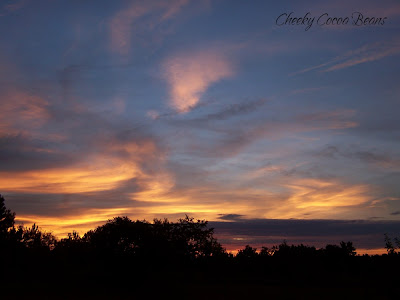 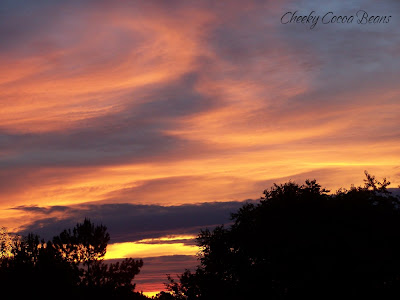 And I even get to play around with very cool features like panorama shots, where the camera stitches together three photos. I took this panoramic shot tonight. (You can click on the photo to get a larger view.) 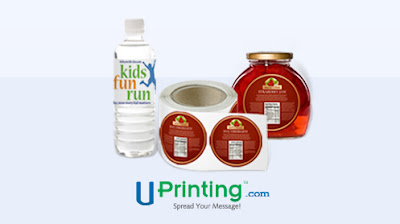 UPrinting is offering my readers a chance to win 250 FREE stickers! What could you do with 250 stickers? You can use them as address labels, stickers to promote your company or event, stickers to spread your message...so many possibilities with UPrinting's roll stickers! With UPrinting, you can create your own design or use one of their standard label templates.

So, what would you do with 250 stickers? Leave a comment telling me how you would use the stickers for a chance to win! (Please make sure I have your email address so I can contact you if you are chosen as the winner.)

For additional entries, you can leave additional comments for each of the following things you do:


The giveaway ends on June 23rd at 10:00 p.m. ET, at which time I will randomly pick a winner from the comments. The winner will receive an email with a coded link from UPrinting to claim the prize.

Disclaimer:
This giveaway is sponsored by UPrinting. No monetary compensation was given and I will receive stickers for hosting the giveaway. For more information about stickers, please visit http://www.uprinting.com/print-templates/labels/.
Posted by Amy @ Cheeky Cocoa Beans 3 comments:

I'm more than just a little tickled that my last post was this one, with the photo of the billboard predicting the end of the world as we know it to be May 21st.

I just wasn't here, posting on my blog. I've been up to my eyeballs with things like finishing school with the boys, cleaning up at least some of my neglected house, and doing exciting things like putting poster board covered with aluminum foil in the windows to keep some of the hot sun reflected away from our western-facing rooms. But don't worry--these aluminum-clad windows face our back yard and no one knows they're there.

So, to distract you from thinking about my windows, I will show you Krispy Kreme donuts. 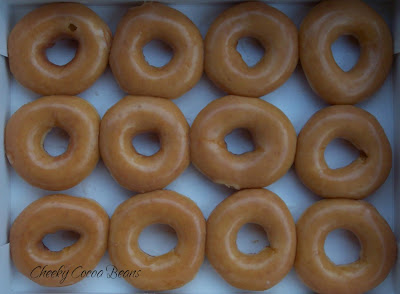 That is a box full of all kinds of awesomeness.
Posted by Amy @ Cheeky Cocoa Beans 3 comments: