Baked Chicken in the Crock Pot

The directions are simple:
Easy and versatile! And not the texture of boiled chicken! ;)
I found this recipe on allrecipes.com. If you go to this link, you can do an ingredient search. Be sure to read some of the reviews listed for each recipe before you try them--you will probably get a good idea of whether or not the recipe will be something your family likes, and there are usually some interesting ways others have changed the recipe for the better.
Posted by Amy @ Cheeky Cocoa Beans 1 comment:

Email ThisBlogThis!Share to TwitterShare to FacebookShare to Pinterest
Labels: Recipes

The latest game this week is skateboard hockey. The tools? Skateboards for Robert and Josiah, a broom, a rake, and smashed, empty Diet Coke cans that serve as the hockey pucks. Add a sloped driveway, and you have skateboard hockey.

Oh, yeah--and a mother wincing at every yell, making sure it is just from excitement and not from an injury.

Somehow one of those Diet Coke cans ended up on the roof. I think I see a pattern here...

Oh, and Josiah's lofty goal of behaving? He didn't make it. He was missing this afternoon for a few heartstopping minutes, only to be found three houses down the street. At a yard sale. Shopping.

After getting in trouble and then being told to pick up all of the Diet Coke can hockey pucks out of the front yard, he went right back to the yard sale again. Perhaps I should have reminded him of his vow to behave...

He had his eye on a fancy car track that was $8, but instead bought a Mickey Mouse umbrella for 50 cents after he remembered that he doesn't have $8.
Posted by Amy @ Cheeky Cocoa Beans No comments:

Josiah just told me a few minutes ago that he was only going to be raking leaves or riding on his bike in the front yard...he was not going to be doing anything that would get him in trouble. In fact, he stated that he was going to try his best to behave until we go on vacation.


I don't know how the child can keep a straight face while he says such things. 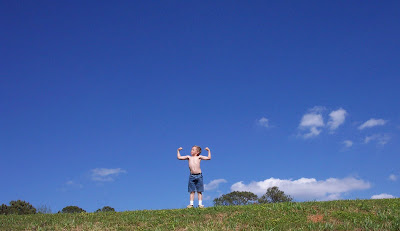 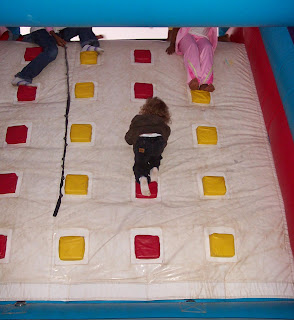 At our recent Pastor Appreciation cookout, the kids had a "Space Walk" playset to climb and jump on. I was letting Grace jump in the netted area while the bigger kids zipped past her to climb up to the top of the slide...then I saw the look in her eyes. She looked at me as if to say, "I'm gonna do it" (and also to see if I would stop her). Grace, at 2 1/2 years old, is just now reaching the height where she can stand on the tips of her toes to turn on the lights...and she's still not tall enough to flip the lightswitches OFF. But she was determined to climb up, and she did!

Completely on her own, she reached the top again and again, sliding down each time with the help of the older boys. 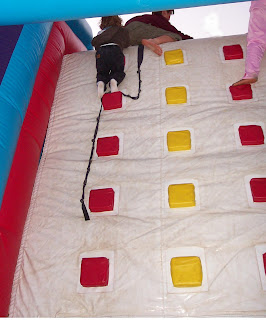 A common phrase around here is, "She is Josiah's sister." And if you know Josiah, you know exactly what that means!
Posted by Amy @ Cheeky Cocoa Beans No comments:

And these are but the outer fringe of His works;
how faint the whisper we hear of Him!
Who then can understand the thunder of His power?
Job 26:14 NIV 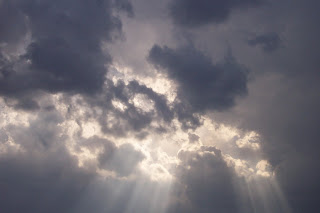 God's voice thunders in marvelous ways;
He does great things beyond our understanding.
Job 37:5 NIV
Posted by Amy @ Cheeky Cocoa Beans No comments:

To the best of my knowledge, I have never

1. Cleaned shaving cream foam off of the boys' toilet.

2. Said, "If you don't start behaving, you are going to supper without any bed!" (Not surprisingly, this was shortly after, yet completely unrelated to, the shaving cream incident. Both boys collapsed in giggles with my mistaken wording, especially the guilty one.)

3. Explained to a six year old boy why he cannot poke his little sister's bellybutton to see exactly how far it will go in.
Posted by Amy @ Cheeky Cocoa Beans No comments: 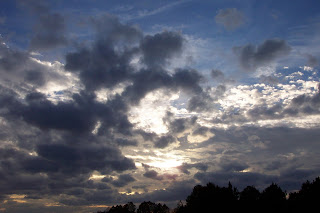 Sing to God, sing praise to his name,
extol him who rides on the clouds —
his name is the LORD—
and rejoice before him.
Psalm 68:4 (NIV)
Posted by Amy @ Cheeky Cocoa Beans No comments: 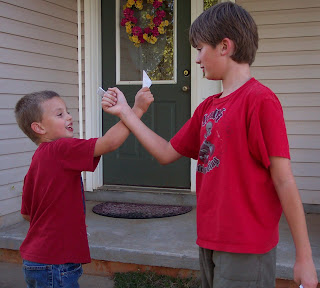 What is going on around here?!?

A lot of serious playing between brothers, that's what.

Paper Ninjas has to be the least violent of their combat games so far, and I appreciate that immensely! (Josiah, being 5 years younger than Robert, appreciates it, too, I'm sure.)

The rules are simple: Try to knock both of the two mini daggers (paper footballs) or Ninja stars (paper spinners) out of your opponents right hand while staying on the front porch or front walk, without touching "anything green" (grass, flowerbed). The fights are timed and are between 5 to 15 minutes long...with infinite rematches. There is a lot of jumping but there is not a lot of yelling, because, so far, no one is getting hurt.

I can't say the same thing for the sock puppets around here, though--they are dropping like flies. And given proper burials (whatever that may be for sock puppets).

There was the one named Bill A. Sockpuppet who was allowed to wander into the street and was run over repeatedly by passing traffic. It was a very sad day. 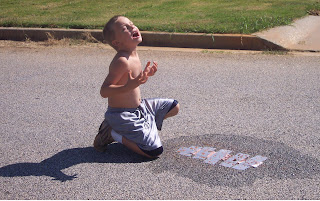 The duct tape holding Bill in place on the road looks a little suspicious, but maybe that's just me... 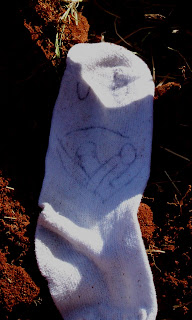 There was also Pharaoh Bill who was buried with his arms drawn folded across his chest.

The graves are marked with gravestones...er, pieces of wood...with each sock puppet's name on it. They are buried at the back of our yard as well as in the woods behind our house, although some particularly unlucky "Bill's" have not been buried but rather are nailed to pine trees. (They are all named "Bill.")

I wonder what they will come up with next? I just hope it doesn't involve more digging!
Posted by Amy @ Cheeky Cocoa Beans 1 comment:

Bears, bears, they got no cares

...Unless they have been trapped on my roof since last Thursday. Who did it? Who threw a little Sunshine Care Bear on the roof above Josiah's bedroom? No confession yet, but Robert said that he tried to threw the bear up there, but it kept rolling down.

Yes, he tried. Then, according to his story, Josiah showed him how it's done.

Josiah has a completely different story, of course, and says that Robert needs to just tell the truth and admit that he did it.

In other bear news, here is Grace (2 years old) singing the first verse of "Bears" by Andrew Peterson and Randall Goodgame:


What Grace is singing:


Bears, bears, got no cares.
Bears don't drink from a cup.
Sharp teeth and claws and furry paws
To catch you and mess you up.

The last line should really be "To catch you and eat you up," but I think we will all agree that it's best she not know that. :) You can find the real lyrics and listen to the real song by going here and looking for the children's CD "Slugs, Bugs & Lullabies." I prefer the songs that Andrew sings, but the kids go for the ones about bears and tigers that Randall sings. Be sure to listen to Andrew's other music. He is a very talented songwriter and storyteller, and uses his gifts to the glory of God. And if he's ever performing anywhere near you...GO!
Posted by Amy @ Cheeky Cocoa Beans No comments:

Email ThisBlogThis!Share to TwitterShare to FacebookShare to Pinterest
Labels: Videos

The End of the Season

Updated to add that Josiah's batting average for this season was .740!! 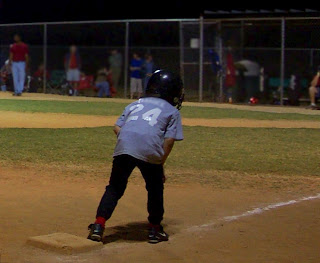 Josiah recently had his last baseball game of the season, and all of the boys were incredibly excited at the beginning of the game. By the end of the game, there was the usual flopping in the dirt and the scooping of the dirt into your glove while waiting in the outfield...I think that's my favorite in particular, since Josiah has a brand new glove that costs more than the Keds I haven't bought yet.

But it was another great game. Josiah had a great time playing baseball on this team and ended the season the way he has played most of the games--getting a hit every time at bat. 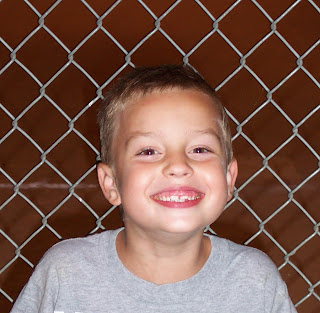 So that's the problem! 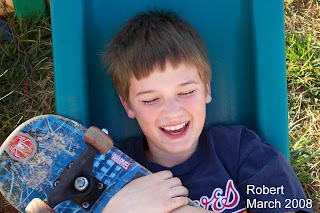 It is bad to suppress your laughter because when you do, it goes back down and spreads to your hips.


When it was time for Josiah's phonics lesson, Grace beat me to it...She grabbed the phonics book, sat on the sofa with him, and began "teaching" him how to read with the next lesson.

So, what is a cheeky cocoa bean?

When Grace was about 14 months old old, she came up to me absolutely begging for a "cocoa pean." I just stood there for what seemed like forever to my little girl, trying to figure out what she might be asking for. "Cocoa pean"? I had no clue!

Until, that is, I looked past her frustrated, tear-filled eyes and saw that she was holding a clipboard.

A clipboard. Then, I got it. (Yes, I am amazed, too.) She wanted to draw with a pen, only in her mind she was trying to say "coloring pens." Oh, the look of pure joy on her face when I handed her a pen and she immediately started drawing on her paper!

After a few months of this becoming a commonly heard phrase in our family, Robert began playing a game with Grace where he would call her a cheeky cocoa bean while gently squeezing her chubby cheeks, and she would become indignant and say that he was a cheeky cocoa bean. She would also come running to me to tattle, "Momma, Robert call me a cheeky cocoa bean!"
Posted by Amy @ Cheeky Cocoa Beans 3 comments: