We have lovely French doors that go from our kitchen to the back yard. They are lovely but cold in the winter, and terribly hot in the summer as they let all the hot afternoon sun into the kitchen. After living in this house for 11 years now, I finally decided to do something about covering the French doors...besides using white bath towels during the summer, that is.

My main problem was that standard curtain rods are too long to fit over the windows. It appears the previous owners did not measure realize this, and they installed the hardware on the door before seeing that the rod would not fit. (This hardware is what we have been hanging towels on using safety pins, so it has not gone to waste.) Also, once you go beyond "standard," you tend to get into "decorative," and "decorative" = "expensive." I didn't want to spend much money on something that at least one child was bound to swing on at some point...hence, the towels.

Until last month, when I decided once and for all that I was going to cover those windows with something, even if it was a bed sheet or two, or three. I searched online at Target.com and found swivel sash rods that were short enough to cover each window area, and they were only $2.49! Whoo hoo! 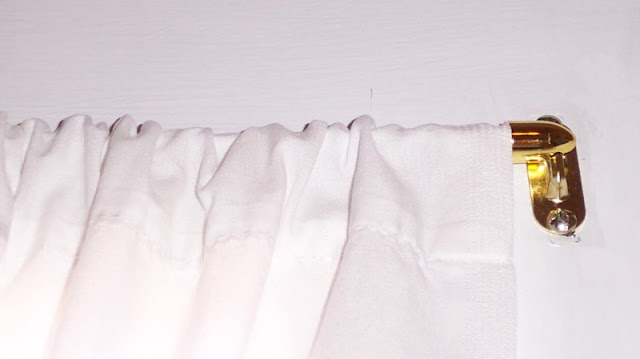 I bought up two white flat sheets at Goodwill, along with a queen-sized light sage green flat sheet to help camouflage the slight differences in the white sheets as well as to block out more sun during the summer. (Incidentally, the two white flat sheets were different sizes--one a twin and one a double--which slightly bothered me but hasn't really made a difference...which was really good since I couldn't find any other gently used white flat sheets.)

The bottoms of both flat sheets became the "top" since they had identical bottoms for the curtain rod to go through. I cut the sage sheet in half, to use one half behind each of the white curtains. I hemmed the flat sheets to a good length, leaving the sage sheet about an inch shorter than the white sheets. If you would like detailed instructions on how to make curtains out of bed sheets, you can click here to read one method.

And, yes, Brenda, I finally used my sewing machine for this sewing project! Not too shabby stitching for someone who hasn't used a machine in more than 20 years. ;) 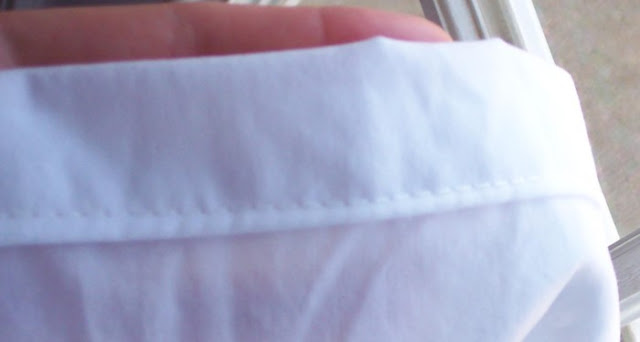 Now the problem of what to do with the sage curtain backing...

Since the swivel rod didn't leave any room to work with behind the rod, I couldn't just sew the sage curtains to the back of the white curtains. My original idea was to tack the sage curtain to the back of the white curtain just underneath the part hanging from the rod. I finished one panel completely (TEDIOUS, especially since I was working with two different sized panels) 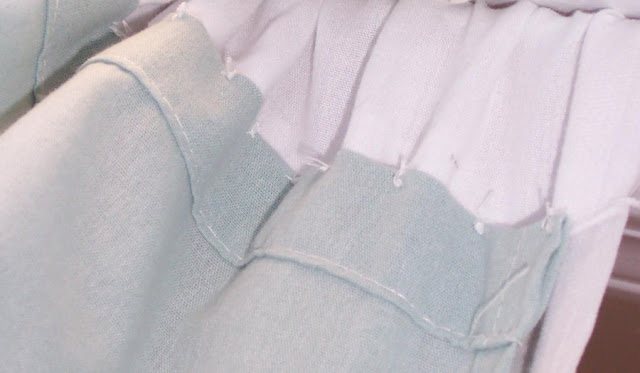 and then spent most of a day thinking how I didn't like the way it looked. 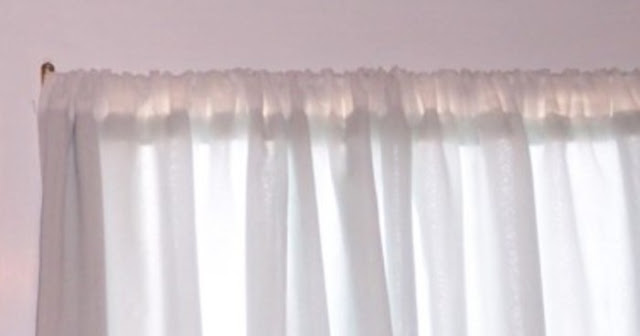 OK...onto Plan B. I decided to try stringing elastic through the top of the sage curtain panel in a loop and then hang that (tied as tightly as possible) over the hardware before replacing the rod with the white curtain.

It sagged, of course,

which I was expecting, so I pinned it up to the top portion of elastic in two places. It still sagged,

so I pinned the sage curtain to the underside of the white curtain in several places... 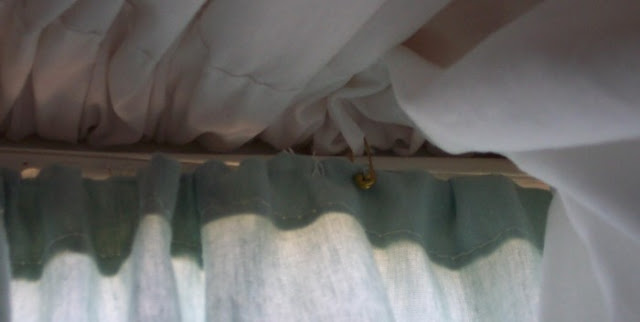 and that (FINALLY) worked! (The left side of photo is the successfully finished curtain panel; the right side was still waiting to be fixed.)

With the piece of sage sheet that I cut off, I made a simple sash for each side: 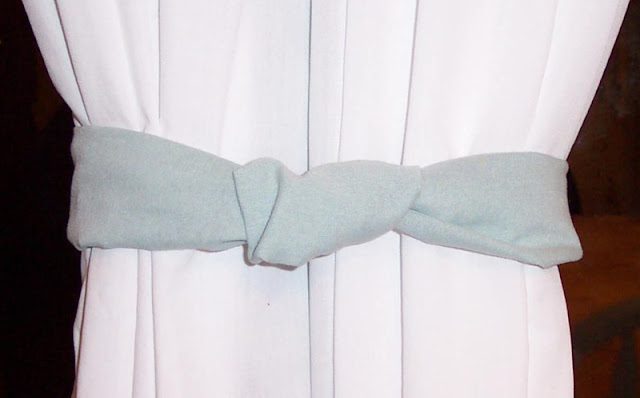 So, I finally have curtains for our French doors! And that works for me! I really like that I can wash each piece separately, which was something I was concerned about when I was tacking the two panels together. Now? No problem! 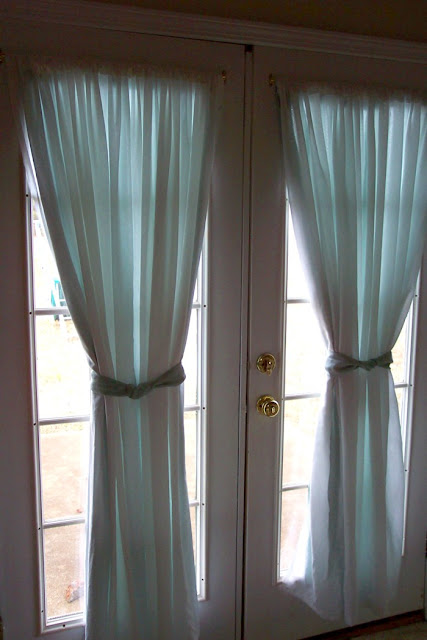 You know what else works for me? With my sewing project, Josiah (8) has a sudden and extreme interest in sewing. He has mended holes in two pair of his sweatpants and a t-shirt, and is hungry to learn more. Last night he started sewing a scarf for Grace (4) using strips of colorful rags, too. 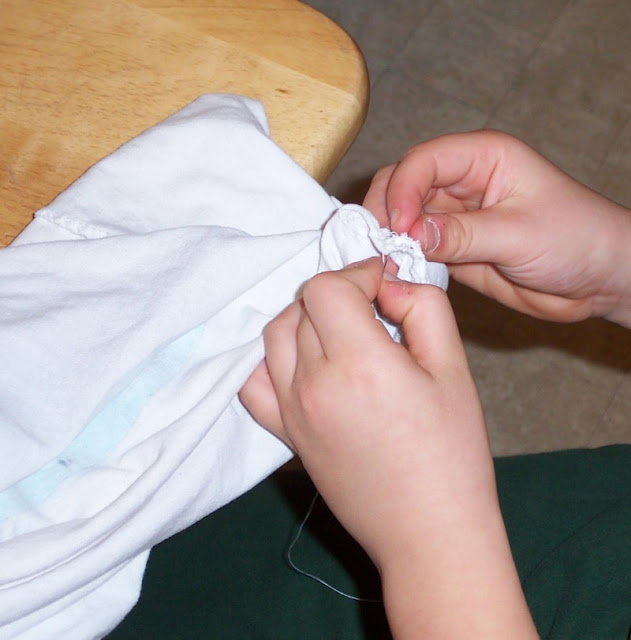 It was the sewing machine that sparked his interest. I think he figures the sooner he learns sewing by hand, the sooner I'll let him use the sewing machine! Still, I will totally use his new interest in sewing to help all of us ease into school next week. I want all of my kids to at least know how to mend a hole, to sew on a button, and to hem. The first few days of school after Christmas break seems like the perfect time to tackle that!

Are you thinking of using bed sheets to make curtains for your home?  If so, for which room?  Will you use a solid colored sheet or one with a pattern? 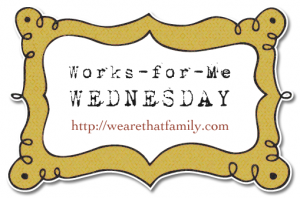 Well, you are just too much!! So talented! Don't you hate it when you think and think and do and do and then spend a whole day not really liking the result? At least you found a great solution!! I'm so impressed!

Great idea!
My 8 year old boy loves to sew. Either by hand or with the machine. It is so sweetly strange to hear the hum of the machine from my bedroom while I am in the kitchen, knowing he is cruising along on another project of some sort. I bought a big basket of quilting scraps and he is in heaven trying to come up with things to make!
Thanks for sharing!
Kristin