What I Learned This Week 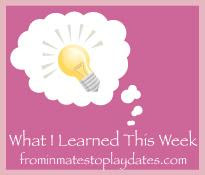 This post nearly wrote itself as I was hacking away at brambles in my back yard. It's been a long time since I linked up with What I Learned This Week...not that I haven't been learning anything, but we have taken the week off from school so I actually have a little more time to devote to my poor, sadly neglected blog.

This week I also have had a little more time to devote to my poor, sadly neglected back yard, which is how we got here to this post.

You see, the house next door is vacant and the yardwork has been tended to by us and the neighbor on the other side of that house so that, you know, it doesn't look so vacant. However, it has been years since the previous owners mowed the back half of their back yard, so it looks like this: 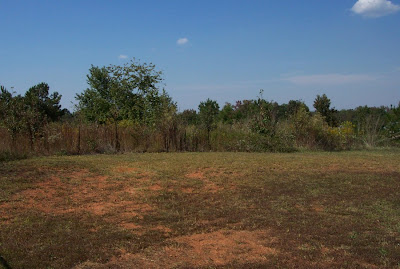 Seriously, there are about a dozen trees in that back section that weren't there 10 years ago when we moved here.

There are also brambles...lots of brambles. And over the summer, these brambles crossed through the fence and grew into our back yard. 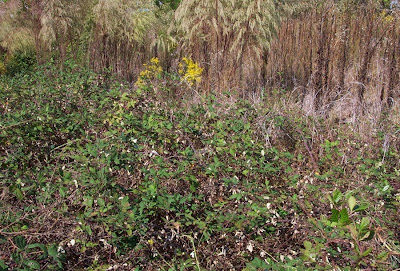 Why, yes, that is ragweed. That's growing and spreading, too. Yay.

While I was cutting away the brambles, I noticed that my mind kept returning to the spiritual applications I could make with this whole process. With the brambles representing sin in our life:

1. Our sin affects those around us with the resulting consequences. Our old neighbors didn't envision brambles and ragweed (and oddly spaced trees) growing to fill the back portion; they simply wanted to pay their lawn guy less money when they made the decision not to mow that area.

2. If we are watchful and stop sin in its track early on, it is easier to deal with because it has not established deep roots in our lives. If I had taken the time to walk around and look at what was happening in my own back yard, I would have seen the brambles sooner. If I had seen that the brambles were growing through the fence earlier, there would have been less work involved to remove them.

3. There is no use going through all of the "if onlys"--you simply have to start where you are and deal with it...and, hopefully, learn from it. Thinking about how I could have/should have done something earlier did absolutely nothing to get rid of the brambles. I could, however, ask Robert to tell me as soon as he started noticing the brambles while mowing our yard.

4. It's easier with someone alongside you helping you. Even if that person is an 8 year old who would just as soon be sitting on the driveway smashing rocks with a hammer...or smashing the driveway with a hammer...whatever. Having Josiah help cut away the brambles helped the job go quicker. And, as a bonus, it kept him from smashing more of the driveway, too. (I wish I weren't joking...)

5. When you are helping someone else in dealing with their entanglement in sin, you have to establish clear boundaries to protect yourself from getting entangled along with them. After I finished cutting away the brambles in our yard, the only thing I could do across the fence was to cut as wide of a gap as I could into the neighbor's brambles. At the very least, this will keep the brambles out of our yard for a little longer next year. 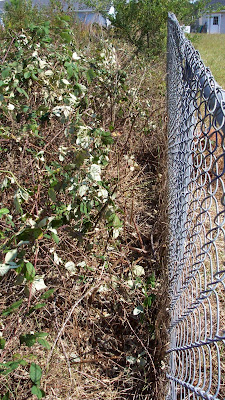 6. You cannot do the job correctly without the right resources. I need better work gloves! However, even though the job was a little more painful without thicker gloves, I would have stopped long before I was done if I had not had the long-handled clippers and lopper.


But now a righteousness from God, apart from law, has been made known, to which the Law and the Prophets testify. This righteousness from God comes through faith in Jesus Christ to all who believe. There is no difference, for all have sinned and fall short of the glory of God, and are justified freely by his grace through the redemption that came by Christ Jesus. (Romans 21-24 NIV)

If you confess with your mouth, "Jesus is Lord," and believe in your heart that God raised him from the dead, you will be saved. (Romans 10:9 NIV)

So I will always remind you of these things, even though you know them and are firmly established in the truth you now have. I think it is right to refresh your memory as long as I live in the tent of this body. (2 Peter 1:12-13 NIV)

What have you learned this week?
Posted by Amy @ Cheeky Cocoa Beans

Email ThisBlogThis!Share to TwitterShare to FacebookShare to Pinterest
Labels: Photos, Scripture, What I Learned This Week

Love this post! It is so very true.
We find our family faced with a lot of worldly things, and it can be quite hard to walk the path that is contrary to the world. What makes it harder, and sad, is that so many Christians dismiss so many things as "harmless", "just for fun", "not something God cares about us doing" or a "guilty pleasure". These are all just that we, as humans, try to justify not walking in God's word.
Little things will creep into our lives, and if we don't pay attention they will take over way too quickly.
We try to teach our children that all of the things that we watch, hear and listen to build up inside of us and that is what comes out. Out of the excess of a man's heart he speaks!
Sorry for the long comment. :) Great post!

I love this lesson Amy! Carrie