Overheard: The Long and Long-Overdue Edition

I’ll start off this long-overdue edition with an old conversation from August:

Jason [watching pre-season football on TV]: Grace, I don’t like Jon Kitna as quarterback. He gets rid of the ball too early and he doesn’t spend enough time in the pocket.

Grace [leaning in, confused, with a bewildered tone of voice]: Are you the same person?

This was Grace’s first experience with the foreign language of football. Jason does this to me, too--I (usually) politely play along and agree with whatever he says, although sometimes I'll get a little sassy with him...as though I know anything about football. ;)

Me: You are so sweet, Grace!

Me [laughing]: You’re sweeter than me?

Grace: [seriously]: Yes. And you are sweeter than me, Mommy. [Hugs me again]

During a trip to Zaxby’s, there was a toddler screaming his head off in regular intervals…Grace looked at me, sighed, and voiced her typical matter-of-fact comment:

Can't you just see her shaking her head while saying that?

Josiah ate pineapple upside down cake recently and loved it. He didn’t remember eating it before, and declared it the best cake in the world. Jason related this conversation…

Josiah [with genuine astonishment and total wonder at this thought]: Wow…my head would explode.

One night while leaving a baseball game…

Josiah: Are there people with two heads?

Josiah: Some girl I was talking to said that there were. I didn’t think there were. It sounds like evolution.

After some of her lunch dropped on the floor, Grace hopped down from her chair to pick it up and pop it into her mouth.

Me: Grace, you shouldn’t eat off the floor. It’s not that clean.

Grace: But it’d only been there five minutes.

Me: You mean five seconds?

Me: Do you even know what “five seconds” means?

So, yes, she has seen the complete demonstration of the “five-second rule” by her brothers.

Me [urging Robert to hurry up and get to bed]: Hurry, Robert! Faster!

Josiah: Boy, I bet Robert’s glad he’s not one of Pharaoh’s slaves!

His Bible lessons have been on Moses. That, along with Grace’s continued fascination with the “Prince of Egypt” movie and children‘s book, means that all of those details remain fresh in his mind.

He meant to say, “You’ll wake up Josiah” but apparently brownies were on his mind…So I made brownies that night. 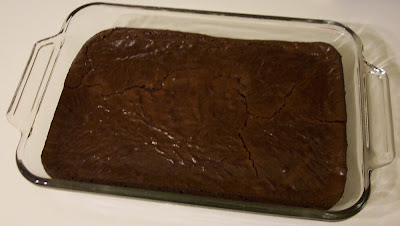 And, may I add, I think it's definitely a turning point in our marriage that Jason wouldn't even wonder why I was standing on a chair in our kitchen to take a picture of brownies...or, at least, he wouldn't say anything out loud about it...

Grace [looking down at her feet as she walks to the car to go to church on Sunday morning: Mommy, I have the most beautiful-est shoes in da whole wide world!”

Grace: If I was in jail, and my mouth was closed, I’d still be Grace.

Me: Why would you be in jail?

Grace: ‘Cause a bad guy put us there.

She went on to discuss various other jail scenarios; one was similar to the story of Daniel in the lions’ den. All were more than a bit odd.

Grace: Mommy, does this make me look like a boy?

She had just put on a Georgia basketball outfit that both boys had worn when they were toddlers…not a bit of pink or purple on it. But, even so, I doubt she would ever be mistaken for a boy. Especially since, as she asked this question, she tilted her head with her bouncy curls in a decidedly girly way.

Josiah [excited and a little annoyed]: Stop it, Grace! I’m trying to get on the blog!

Robert [from the next room, in a tattle-tale kind of voice]: Mom, Josiah’s just trying to get on the blog. 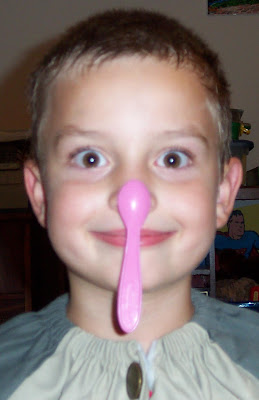