Fun in the shade

The boys set up the Spiderman water slide in the yard (mostly in the shade, at my insistence...Robert insisted I add that disclaimer) and played 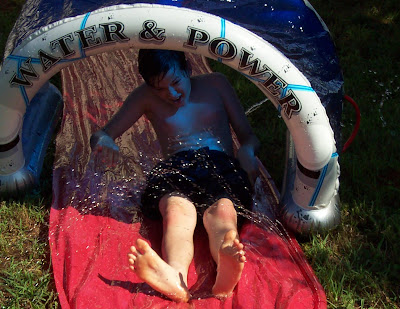 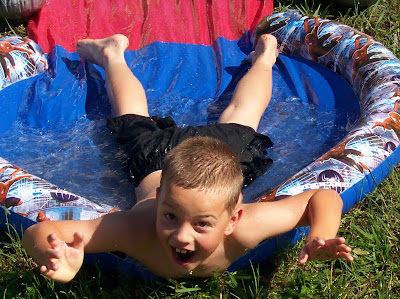 while Grace played in the pool end of it in between the boys' trips down the slide. 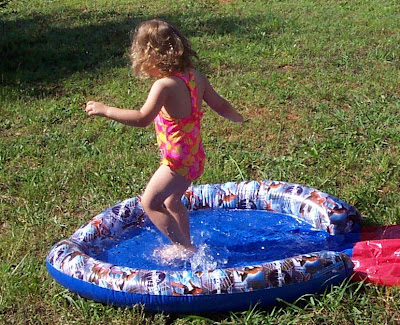 The boys gently pushed her down the slide, too. 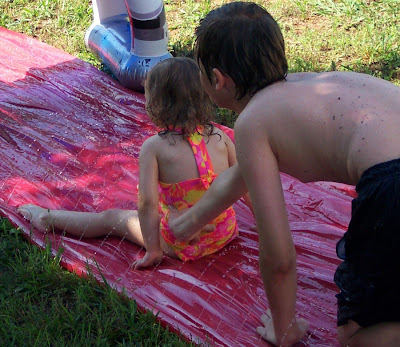 And then...this is almost certainly when Grace was (unknowingly) brushing off ants. (A nearby ant hill was getting splashed with water, and that was what angered them. They traveled a few feet to reach where Grace and the boys were standing.) 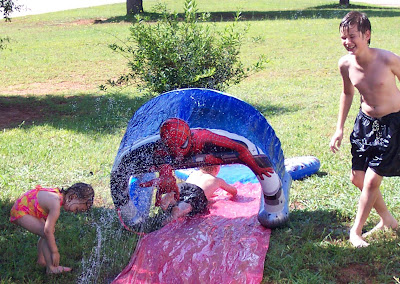 She didn't even know she was getting bitten (probably because of the cold water, along with the bits of dirt sticking to her camouflaging the black ants). A little later she came to me, crying, because she said she had scratched herself...it was actually an ant bite further up her leg. At that time, I only saw a huge welt across her foot. I immediately gave her Benadryl and started applying Hydrocortisone cream, since I already knew how she reacts to ant bites.
When I was on the SEVENTH site, with more sites--and more welts--still appearing, I called the doctor's office. (How much is too much Hydrocortisone for a three year old? I didn't want to overdo it. And how much Benadryl could I give her? She was still continuing to react as time went on.)

One doctor visit and two prescriptions later, the ants bites finally appeared in a distinct form (replacing, for the most part, the numerous welts) and I counted at least 21 ant bites. :( She's still very itchy occasionally, but otherwise is doing well.

The boys went back out to play in the water later that afternoon; I put Grace in the bathtub to let her splash a little. It's going to be a while before I let her outside again with the water slide--at least until I can kill several hundred ants...
Posted by Amy @ Cheeky Cocoa Beans