I don't think chess has ever been played like this before 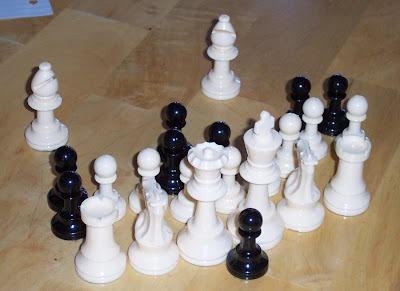 Josiah says the caption of this photo is "Has anyone ever told you about Jesus?" The bishops are preaching to the congregation.
Jason played chess with Josiah a couple of days ago. Several years ago, Robert decided to teach Josiah how to play chess. Seriously--he was four years old. Josiah learned the basics--how each piece moves--and played off and on with Robert for a while until they moved on to something else. After playing with his daddy, he decided to teach Grace how to play chess. (Never mind that he had basically just relearned how to play!) 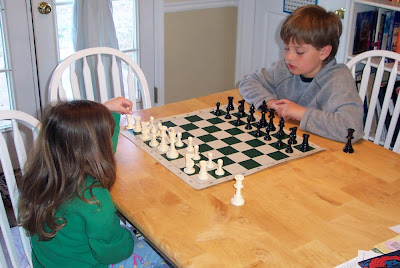 It was quite entertaining listening to the conversations! And quite possibly it was the first time these words have ever been spoken during a chess match...

Grace [holding the queen, and speaking in her sugary-sweet munchkin voice]: Please get out of my way--I'm going to have a child.

Grace [seeing Josiah's piece advancing towards one of her own and speaking with a fake panicked tone]: Please don't kill me!!

At the end of one of their games, Josiah announced that he had won. Grace decided to try her luck with changing the rules...

Grace [matter-of-factly]: No, you have get all my pieces.

I think it was also the first time the pawns were referred to as baby dolls, but I could be wrong.

After a few games, Grace let Robert take over her pieces and he beat Josiah. 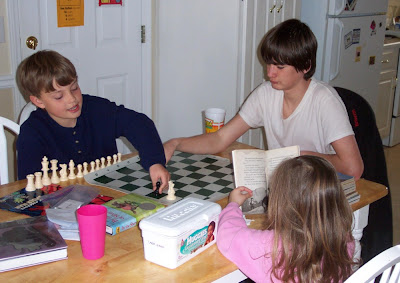 Apparently while she started reading a good book... ;) 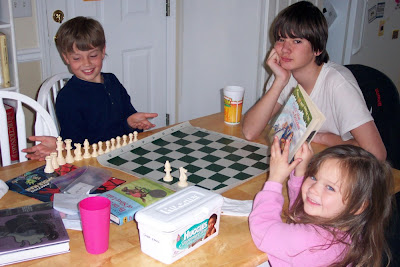 Sometimes chess could use a little imagination..

Oh my goodness...that is SOOO funny!! My two boys enjoy playing chess too.

How cute are they?! I love the last picture...and the baby dll references!

I used to play chess when I was a kid. I probably wouldn't remember how to play today because it was so long ago. I love the caption under your first image. Very creative!