What I learned this week 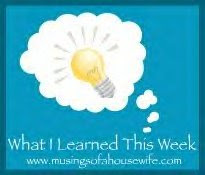 Jo-Lynne at Musing of a Housewife hosts a blog carnival called "What I Learned This Week." I occasionally join in...you know, during weeks when I've actually learn something.

Soooo...What have I learned this week?

I will Google strange things, even artists I'm mildly curious about after seeing them on JCTV, when I am confined to a recliner while propping my leg up for hours on end. (JCTV is a Christian music video channel that we now get thanks to the digital converter box. We may never get to watch NBC after it goes "all digital," but hey, we get this new station that is a favorite of Robert and Josiah. Clearly, it's a fair trade.)

I'm younger than Toby Mac. Oh, wait--I already knew that. I'm just trying to make myself feel a little better about being older than KJ-52.

The Herodium mountain is a man made mountain that King Herod had moved, bucket by bucket, to build his palace-fortress. (Go here and here to see photos of Herodium; go here and here to read about Herodium.) This is likely to be the mountain that Jesus referred to in Matthew 17:20, when He said, "...if you have faith as small as a mustard seed, you can say to this mountain, 'Move from here to there' and it will move. Nothing will be impossible for you."

Bucket by bucket...not "snap your fingers and it will happen." Hmmmm...

Visit Musing of a Housewife to see what others have learned this week! I can almost guarantee no one else will mention KJ-52 or Toby Mac.

Email ThisBlogThis!Share to TwitterShare to FacebookShare to Pinterest
Labels: Kooky talk, What I Learned This Week

Sounds very interesting. I didn't know much about any of those things. That's a cute meme! I hope you are having a wonderful weekend and a Happy Mother's Day.

KJ-52 performed at Revolve. Some of the gals from our church raved about him. =)