Last Thursday, Jason and I had the opportunity to use a very generous gift card we had been given to Morton's, a steakhouse in Buckhead...or, as their website says, The Steakhouse.

As we were driving over, I opened the gift card envelope and chuckled. The personal message written inside was "Congratulations on the birth of your baby girl!"

Our baby girl is turning three years old in a couple of weeks. It's a good thing this gift card didn't expire. We just haven't had that many opportunities to drive to Buckhead or downtown Atlanta for dinner in a restaurant where they have probably never even seen a child. But this time, we already had plans to be in the area (more on that soon) so we took this opportunity to redeem the gift card.

Um, yeah...we didn't need cameras for that. ;) We were laughing at ourselves so much, we didn't really need any other help. We'd say (when we were alone, of course!) that it was really "just like Rafferty's" where any waiter would come by with a refill for you. We also (privately) wondered just how much the hostess would stammer if one happened to ask for a high chair.

At one point, our waiter gave an odd chuckle at something that Jason said to him. I can't really describe it, but it reminded me of the way Robert will chuckle in a weird, rude way when he thinks Josiah is being...well, a goofy six year old. As the waiter walked away, Jason and I just looked at each other like "What was that?!" And then? Well...we giggled. Because, really, we certainly weren't going to be rude to this man, but his opinion of us matters very little.

That particular incident was certainly after I had taken a picture of the pewter pig lamp on our table. It was a gorgeous restaurant and if Jason wasn't going to let me take pictures, I was at least going to take a picture of the pig before he snatched my camera away! ;) 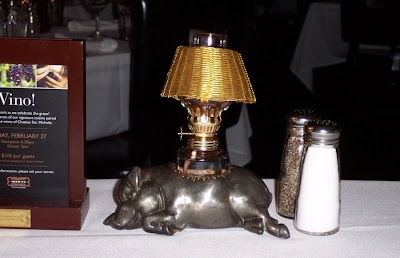 You can buy your own Morton's pewter pig lamp for a mere $80 here. Every table had one.

This was definitely a place to see people and to be seen...Even the booths were situated in such a way that you could get a clear view of nearly everyone in the restaurant. We were seated at a booth and were "tucked in," as Jason put it--the table was pulled away from the crescent shaped booth seat, we sat down, and the table was pushed in to it's proper place. We nearly had the whole place to ourselves; one other couple was seated at a booth on the other side of Morton's about halfway through our meal. It was a slow night for them.

Yep, I also took a picture of the ladies' restroom, with their fancy cloth-like towels on the counter. 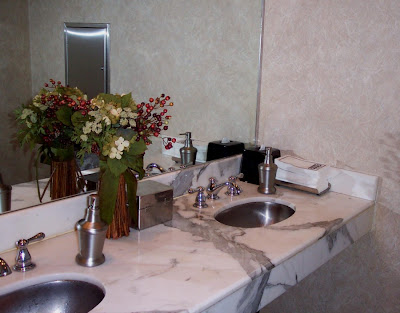 And after I got back to our table and the waiter brought the check, I had to get a picture of what a $9 bottle of water looks like. That's Jason's arm beside it--I think he's leaning in to attempt to shield the flash from the camera so we don't totally embarass ourselves by taking a picture of a water bottle at such an elegant restaurant.

That's Italian bottled water, bottled at the source in Italy. Don't tell anyone I said so, but it tastes just like ours to me.

How was the food? Fabulous. I had the best $32 salmon I've ever eaten (salad or side dish not included in that price, by the way). Can I deal with going back to eating a $2 packet of salmon from the grocery store (makes two lunches for me when heated in a skillet with some olive oil and salad dressing, and served over rice)? Absolutely!! Do I ever want to get a check for over $120 in a restaurant again?

Do I really need to answer that question?

One of Jason's comments was that for the price of our meal plus tip (and not counting the very generous gift card), the two of us could have eaten at Rafferty's in Athens four times...and he still could have gotten a more than decent steak, and I would have been perfectly happy with my chicken finger salad with no eggs and with honey mustard dressing on the side.* Plus, if we're at Rafferty's, we're generally not wondering if the staff is congregating to talk about us while they polish the silverware, rearrange the table settings just so, and look our way...

Then again, if we're at Rafferty's, we're generally asking for a high chair.

How funny. Even the bathroom made the blog =)