"Excuse me, but I need you to sit over there."

We went to Zaxby's tonight (whoo hoo!) and while the rest of us were eating our yummy chicken and seasoned fries, Grace kept turning around to look at another family seated across the aisle from us. I finally told her, "Just turn around and eat your food!"

She turned to look at me and said, quite seriously, "But, Momma, I don't want him to sit there. I want him to sit over there," indicating the other side of the family's table.

She wanted to rearrange their seating arrangement. And she doesn't even know them.

We are in soooo much trouble.

~~~~~
After Grace gave up on ever getting that family across the aisle to cooperate and change seats, she turned her attention to Jason's plate of celery sticks. He had never gotten celery sticks before, and you could tell because every two minutes Grace asked, "Can I have some of dat?" I repeatedly told her she could after she finished the chicken on her plate. It didn't matter...she asked me over and over again. Finally, she tired of my answer and turned to Daddy. "Daddy, can I have some of dat?" He repeated the same thing I had been telling her. She immediately looked at me in disbelief. Because, really, why would Daddy say that?
Finally, she finished her chicken. And you have never seen anyone so excited about eating celery before. She loved it. She generally loves anything that has a sauce to go with it, and crunchy celery with ranch sauce was no exception. 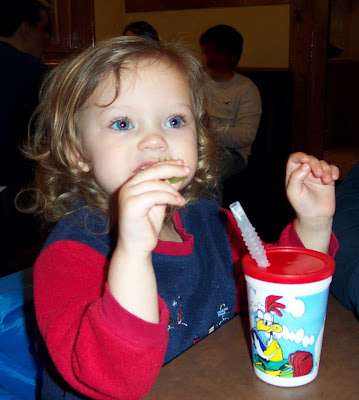 (The blurred family behind Grace is the one she tried to rearrange. In my opinion, their choice of seats was just fine.)

As Jason started eating the celery, Josiah (eater of all things) asked if he could have some "salary."
Robert corrected him. "You can't have a salary. You don't have a job."
Josiah, eater of all things, didn't like the celery. But he did have fun with the Wikki Sticks that came in his kid's meal. 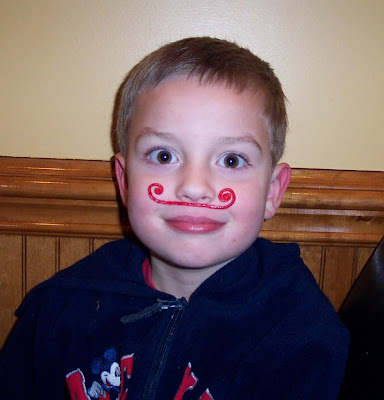 I think the family should have given in to Ms Grace and rearranged......lol

Now come on... you know that Grace has every right to rearrange even those that don't belong to her! :)
How dare they not comply!!!