Grace [bubbling over with excitement...until after 1:00 a.m.]: Dis is my furst Kissmas!

I didn't bother correcting her. :)
~~~~~
Grace [after finding out we would spend the night at her Aunt Cindy and Uncle Kerry's house]: Ya mean we gonna spend da night? Dat's a gate idea!!
Here she is pretending to sleep, in a bed that wouldn't even be hers: 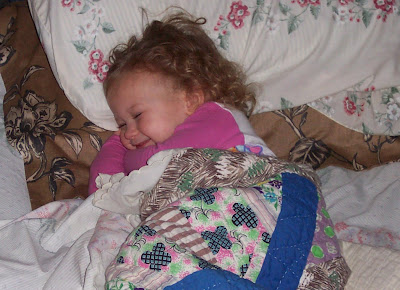 Grace [trying to get Jessica to put her small Yorkie, Bambi, down so she could play with her]: Just put 'im down and let's see what happens!

Look at the puppy's eyes...I think that means "Leave me alone, scary children!"

Cindy [opening the gift of a King of Queens DVD set]: I love me some Kevin James!

Jason: I don't think that sentence has ever been uttered before by anyone. 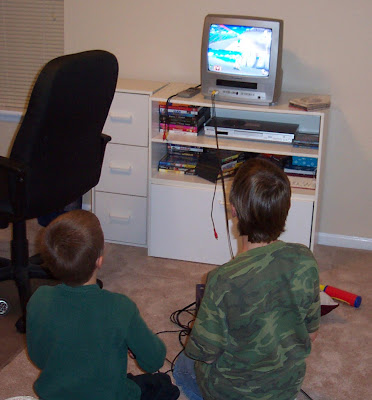 I won't mention anything (specific) about Charlie's parachute. But I really wanted to include something about Jason collapsing on the floor behind the sofa when he was overcome with laughter. Oh, well. 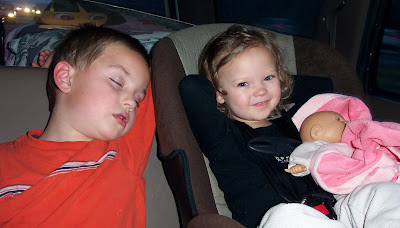 Josiah [thirsty and offended after being offered some of my sweet tea]: Sweet tea?! I'm not a girl! I don't drink sweet tea!
Posted by Amy @ Cheeky Cocoa Beans

LOL -- so many of these cracked me up! (Especially about Kevin James -- LOL!)

I have to agree, I giggled at most of the "overheards" but seriously... Kevin James... He's one sexy man! LOL