To say that Jason was a little surprised to find this in Cindy and Kerry's house would be an understatement. 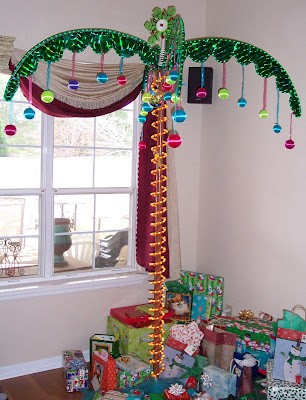 He told everyone who would listen how, when he first saw this, he went from room to room looking for the "real" Christmas tree. This is what he wanted to do to the impostor: 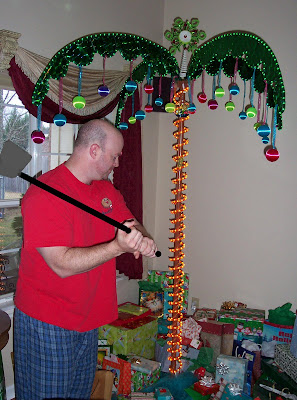 (That's supposed to be an ax...I have limited skills when it comes to drawing pretend axes with photo software.) Instead, he simply referred to the tree as the "Vegas tree" every chance he got, and shook his head in disgust every time he looked at it.
[Not everyone shared his disdain for the tree. Josiah even mentioned it today, while we were taking down our tree, how EASY he thought it would be if we had the "Vegas tree." "We could be done in, like, FIVE MINUTES!" Because he's such a practical child...when he wants to be.]
And look! Cindy had plates and napkins that matched the tree! Alas, it only gave Jason something else to poke fun at. Can you tell he's her little brother? ;) 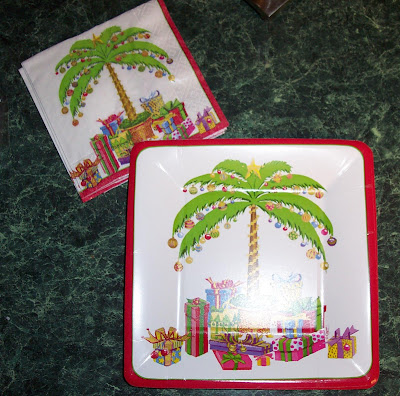 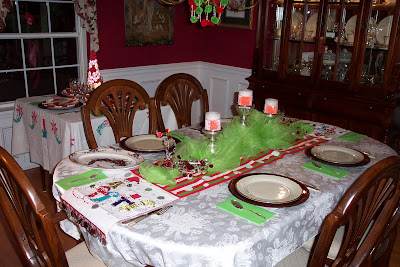 And, personally, even I wanted to sit at the children's table this year. See the peppermint lollipops across the swirly peppermint plates? And the centerpiece? And the snow globes for each child to take home? CUTE! 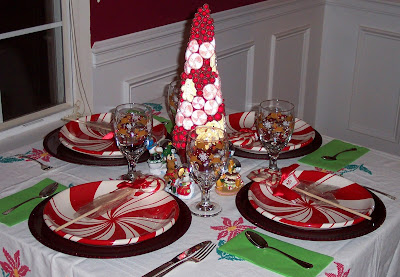 With all of the excitement, presents under the tree, cookies and candy waiting to be eaten, and simply being in another house (with a dog! who comes inside!), it was hard for Grace to settle down. But eventually, she went to sleep. 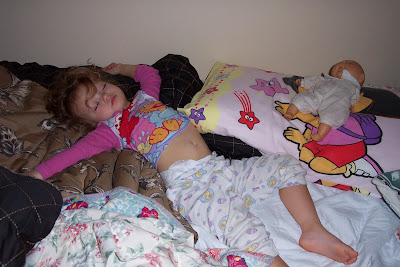 Let me tell ya...it was not a restful night. The right side of the picture is the head of the bed--she was upside down much of the night, which works fine if you're sleeping by yourself in a crib...otherwise, not so much. It even looks like her baby Emily had a rough night.
Although we did not awake fully rested, we woke later than we were expecting since the boys were busy playing Super Mario (again) after eating a nutritious breakfast of the candy that Santa left in their stockings. That's why they were so quiet.
Santa brought Grace a sweet little doll. Grace named her Miss Muffy, although no one knows why she picked that name. She is in love with this new pink baby, but Emily is still #1 in her heart. 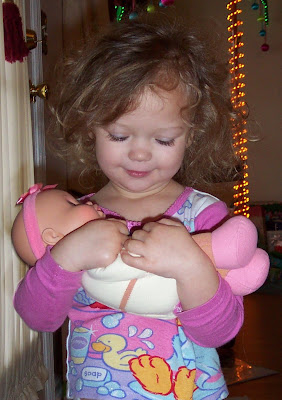 Santa brought some water gel guns for the boys. We're gonna have to talk to Santa about that brilliant idea. Fortunately, the gel has already run out, and they never actually shot each other...that I know of.
Cindy handed out the presents in order by age--youngest to oldest. Jason repeatedly noted that, after Cara, he was the next oldest (with a difference of HOW MANY years??). He was also the one who fussed when Cindy went out of order. 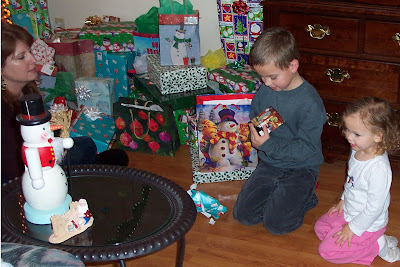 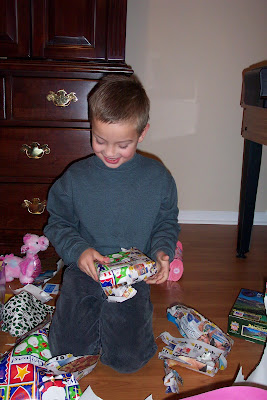 Don't worry, I'm not showing them all...but look! He's smiling through all of the unwrapping! 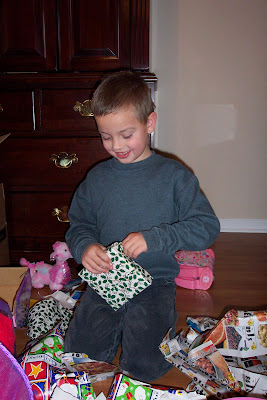 Ahhh! Worth the effort. An MP3 player! Whoo hoo! 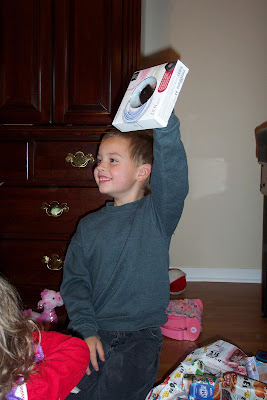 I was on the ball and already had the battery fully charged (Whoo hoo! Rechargeable battery!) and loaded with music for him. This MP3 player has a built-in speaker and belt clip, so it became a tracking device for Josiah. We knew exactly where he was at all times...playing Super Mario Go-karts when he wasn't sneaking into the kitchen to get "supplies" (cookies) for him and Robert.
Is it just me, or does Robert seem more excited about a Webkinz otter 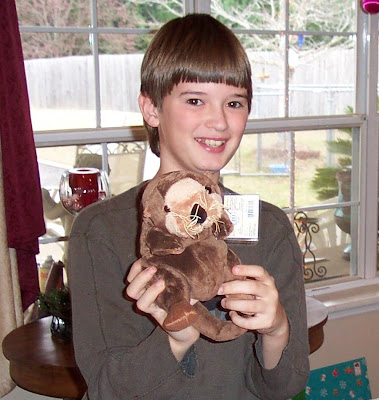 than he does about a digital camera? 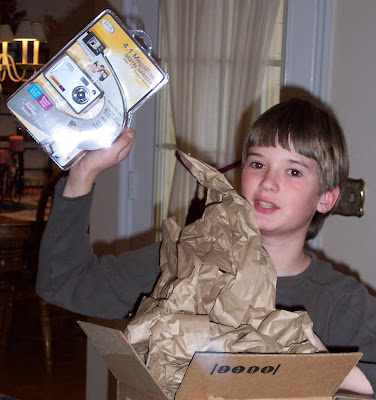 Grace opened a box full of dress-up clothes, complete with "shoes wid pink ribbon on dem"--heels!! She wobbled and fell only once or twice the first day; now she can run with them on. It is entirely possible that she has already logged more time in heels than her mother has. 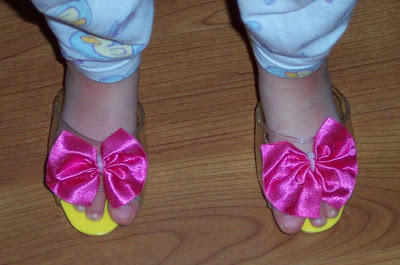 What do you think...future Red Hat lady? She wanted to wear her new red dress, plus some dress-up clothes, over the outfit she already had on. 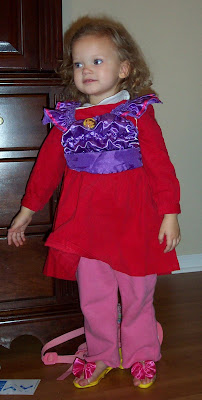 Cara looks more and more like her mother Cindy every time we see her. She is growing up...beautifully. 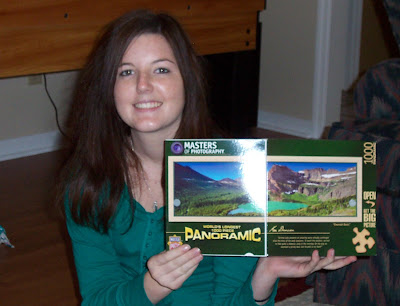 Charlie and his girlfriend Jessica came for dinner. It was good to see them again, and Charlie was a good sport suffering through the teasing about his parachute (you know, the one I wasn't going to mention). You can see Bambi escaping from the children by perching behind Charlie's shoulder. 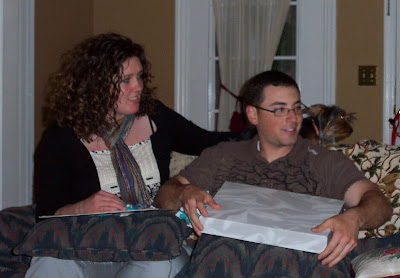 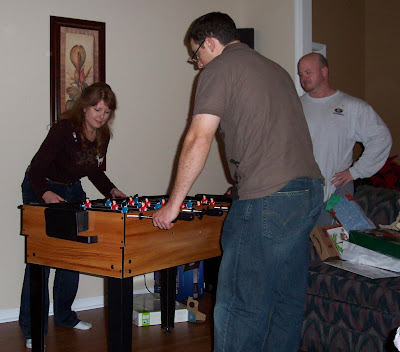 and the annual foosball tournament. Apparently it's a rule that the winner must strike the "Super Star" pose (think: Molly Shannon on SNL). Or maybe Cindy just gets a kick out of that...

I so need a vegas tree than I wouldnt have all thr trouble of putting mine up or taking it down, guess thats why it is still in the living room!!

The Vegas tree ... so funny :) You got a lot of great gifts, and took so many nice photos. I enjoyed them!