This week’s theme of the You Capture blog carnival hosted by Beth over at I Should Be Folding Laundry is Feel.

I’m sharing photos from our trek up Stone Mountain (aka "Snowy Mountain" to our little Dora the Explorer fan) last Saturday. We felt a whole myriad of emotions that day, including anticipation, awe, fatigue, and a sense of accomplishment (or relief?!) as we climbed back into our truck to drive home.

This was immediately after Grace said those dreaded words, "Mommy, I want you to pick me up." We had already been walking for a while; the guys continued walking up without us. I carried her about 10 feet to some shade, gave her some water, and then she was recharged and ready to go again. She never asked to be carried after that. 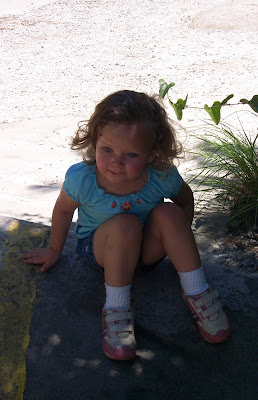 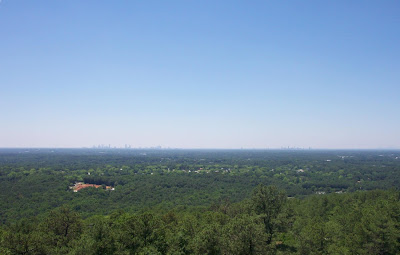 Fearless...In the next picture, she was starting to go up as I took the pictures of the skyline. She told me, "I don't need to hold the handrail, Mommy." (She did hold my hand and I held onto the handrail.) 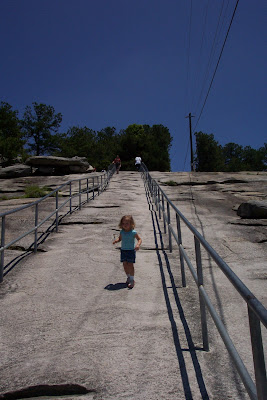 Shortly after we climbed the handrail portion, we met back up with the guys as they were on their way down. Robert shared his water with Grace. The guys had refilled their water bottles at a water fountain at the top of the mountain. 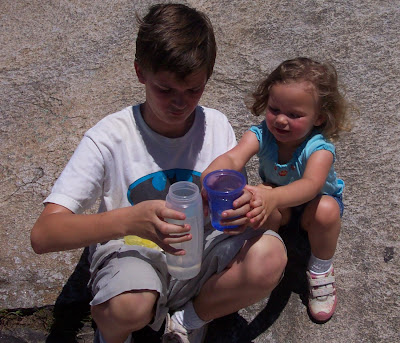 The guys continued their way down, and Grace wanted to continue climbing with me but she was very thirsty and I knew we'd run out of water again. This was as far as Grace and I made it. I took some more pictures as Grace sat and drank her water. 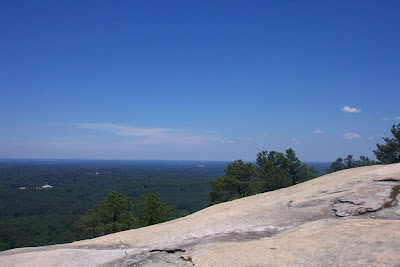 If we had had a greater supply of water with us, I think she could have kept on climbing. Without the water, though, there was a good chance I'd be carrying her the whole way down...not an option! 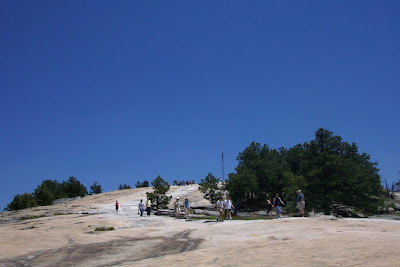 We started back down, and I had to tell Grace repeatedly to slow down on the handrail part. She giggled at me.
Grace stopped to admire the granite on these steps and really wanted to take a pocket full of rocks home. (Ummm...no.) 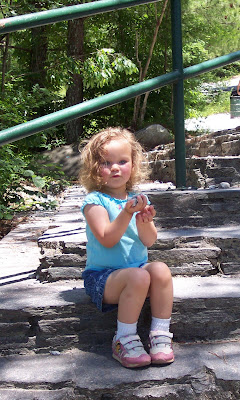 Once we reached the bottom, both Josiah and Grace said they would climb it again! The rest of us were tired and hungry. :)
I just had to include this one. It has nothing to do with the theme at all (except maybe disgust); it is merely a telephone pole covered with gum. Ewww! Grace calls it a gum tree. ;) She agreed that we just had to take a picture of it. 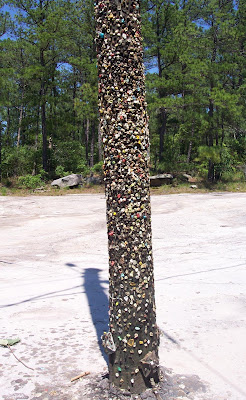 Later Saturday afternoon, Josiah met with his baseball team one last time. Each of the boys received a certificate. They had a great time, but I think we were all happy that the season was over! 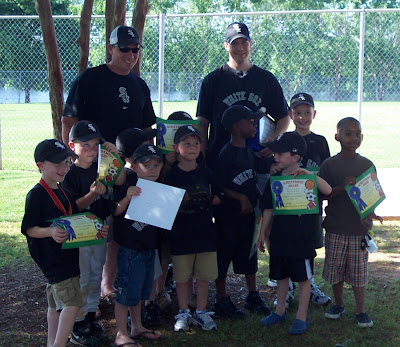 This is an area we drive through on the way to and from the ballpark. It makes me feel peaceful. 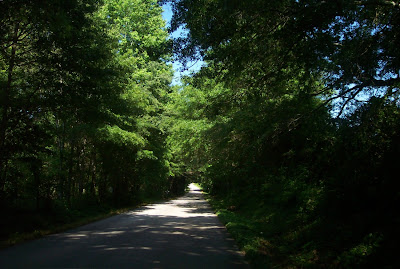 Updated to add these...

Oh, how could I forget? Chocolatey bliss! 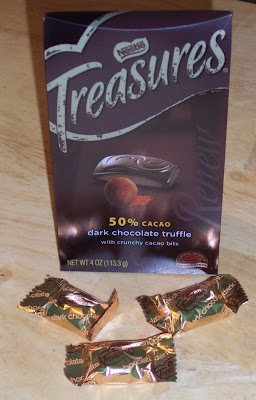 These are absolutely delightful! They are Nestle Treasures: 50% cacao...dark chocolate truffle...with crunchy cacao bits! And they were $.99 for a bag at our Bell's Discount Grocery Store!

And the feeling of joy with yet another visit from the Tooth Fairy, leaving a Bugs Bunny kind of look...which he demonstrated to me early one morning after shaking me awake. 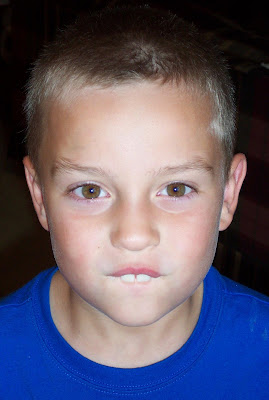 Check out I Should Be Folding Laundry for more You Capture participants.

Click here to see my previous You Capture photos.

What a beautiful blue sky! The gum tree is pretty disgusting. I think my favorite is your last picture. I love the green tunnel. Definitely peaceful.

Those are AMAZING..except the gum. I gagged a little. Great job!

Beautiful pictures. The sky is sooo blue. Thanks for stopping by!

Those pictures are AWESOME! That covered road I think is my favorite, I love when a road almost looks like a cave because of the trees!

Your children are gorgeous!

Come on over and check out what I posted about, Feeling Old.

I love the shot of the road. And the blue sky is wonderful too!

keli [at] kidnapped by suburbia said...

Fun!!! The last time we went to Stone Mountain was I think on the coldest day in Georgia. Seriously, I wanted to crawl into my skin and die. Your day looks MUCH better.

Your comment on my blog cracked me up -- I live in South Carolina, so not too far from you. I just really REALLY like the heat compared to the cold. :)

Those pictures are great.. Looks like your kids had a great time.. I would have had to take the picture of the gum tree too. And I wish my trip to the ball park looked like that!

Love the gum tree! Great pictures. What a fun time!