He's still a "hellfire and brimstone" kind of guy

Josiah was sitting in the pews on his first night of Vacation Bible School at Robert's friend's church this week. During the worship rally, the leader asked the kids "Why do we worship God?"
Josiah's hand shot up and he was called on.
He loudly answers, "So we won't go to hell."
The leader paused for a moment and stepped back. Then, with more composure than I think I could have mustered, she said, "Ummmm...I'm gonna say 'yes' and 'no.'" And she quickly moved onto the next child with a raised hand.

This is the same child who has announced to complete strangers things like, "Halloween is the devil's birthday" and "No, we don't celebrate Halloween. We don't love the devil."
For the record, we have never, ever even suggested such a thing. Josiah quite easily makes things up as he goes along and doesn't hesitate to spice up reality with his wild imagination. Also, he was four years old at the time these conversations took place. He was a little milder at the age of three, when he would merely lecture other children in stores about not kicking their brothers because "Jesus wants us to be nice to each other, and being nice to each other makes Him very happy." You still had to listen closely, though, because at any moment he could--and did--slip into the "hellfire and brimstone" talk that he apparently still does to this day.
~~~~~
Slade told me about a conversation Robert and Josiah had where Josiah asked what Robert's first car would be. Josiah said that his first car would be a monster truck.
To which Slade said to me, "How appropriate. And he would have a bumper sticker that said, 'Turn or burn.'"
~~~~~
But back to VBS...The kids all enjoyed VBS last week. Friday was the family night and each class performed something.
Grace willingly went up front with her class so she could "sing for me." (That's how I pitched it, since she didn't want to leave my side once her classtime was over!) The 3 to 5 year olds sang a simple song and shook their jingle bell instruments...and they actually sang! The teacher put the microphone in front of a few of the kids to let them sing into it, and Grace had absolutely no hesitation when it was her turn. 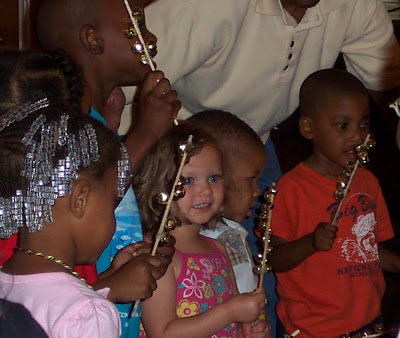 Next were the 1st and 2nd graders (Josiah is the one in yellow). Josiah had a speaking part in a little skit his class performed. Maybe they figured with lines, they'd be safe. ;) 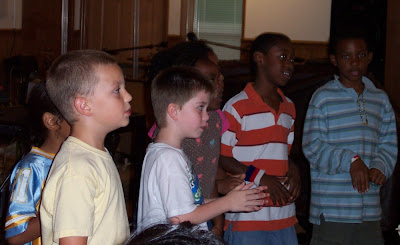 And look! Robert with a microphone! 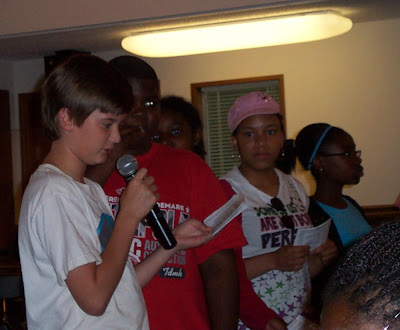 He says he was forced into a speaking part, and I believe him. ;) That's not something he would have volunteered to do. (That's his friend in the red shirt who invited us to VBS.)

Robert did very well with his speaking part. Way to go, Robert!

Can't wait to see and hear what Josiah will say or do at our church VBS!!
Kim

Hope its a good time. Thanks for sharing....