Works For Me Wednesday: Making Spice Mixes For Recipes Ahead of Time

For at least a year or two, I have measured out the spices I used in a specific chili recipe in two batches at a time...

once for the recipe I was preparing that evening, and once for a time in the future.  I labeled the second batch of spices with the name of the recipe (because I always think I will remember but...you know what happens) written on an empty spice container that I used for storing the mix over and over again. 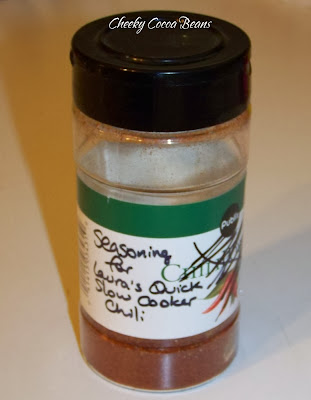 Recently, in an effort to simplify things, as well as the realization that chili was off the menu on plenty of evenings if I didn't have the spices already measured out, I decided to mass produce the spice mix for my chili recipe. 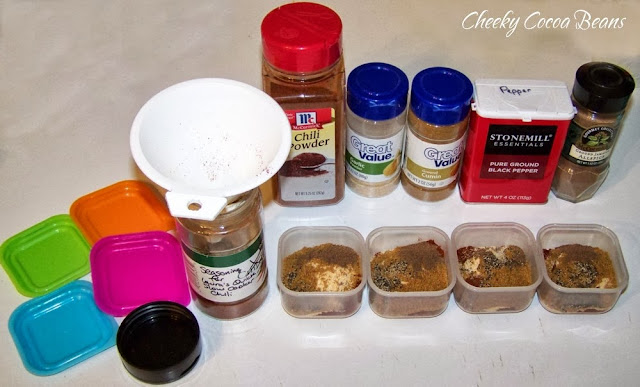 I used plastic food containers that I already had on hand.  I store these in a larger plastic food container that is now labeled "SPICE MIXES" so that the spice smells don't take over my pantry.  I plan on measuring out spices for another recipe, too, so I already labeled the bottoms of these little containers with a "C" for chili (along with a note stating which specific recipe these spices go with because...you know).

The process of measuring the spices into a series of containers all at once took a couple of minutes longer than measuring them for one use.  Chili will be back on the menu more often this winter, and I will expand this idea to other recipes for more time-savings...

And that works for me!  Click over to We Are THAT Family for more Works For Me Wednesday ideas.

If you are interested, here's the link to the chili recipe I use:  Laura's Quick Slow Cooker Turkey Chili.  I mostly follow the directions but have tweaked it to fit my family.  I am allergic to the beans listed in the recipe (I can eat great white northern beans and that's about it, and I only add one can instead of two), so that's one change I made.  I have never, ever made this recipe with tomato soup but always use some form of diced tomatoes, and I have not added red pepper flakes because I want my kids to eat the meal.  :)  Be sure to read the comments on the recipe to see what others have changed--you'll likely find what will work for your family in particular, too.  Even though the recipe is for a slow cooker, I usually prepare this on the stove top.
Posted by Amy @ Cheeky Cocoa Beans

Email ThisBlogThis!Share to TwitterShare to FacebookShare to Pinterest
Labels: Recipes, Works For Me Wednesday