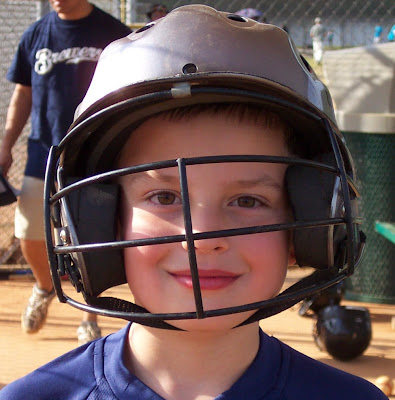 One of Josiah's nicknames that Jason calls him is "Burger Boy"...now, Josiah doesn't particularly like to be called this (so please don't start calling him Burger Boy...), but that doesn't stop his father one bit. The following things were recently overheard:

We were telling Jason about the incredibly warm room where the musical recital was held. Josiah ignored my instructions of "put on your church clothes again," and decided to put his church clothes over his shirt and shorts rather than doing the logical thing of undressing before putting on new clothes. He was terribly hot with the extra layer of clothing.

Me: I told him he could go take off the shorts and shirt he was wearing underneath, but he didn't. I'm surprised he didn't melt in the heat.

Jason [to Josiah]: If you had melted, all that would have remained would have been two eyes and a burger!

Josiah nearly fell over laughing at this thought.

Someone at church heard Jason calling Josiah "Burger Boy," and asked why he called him that.

Jason: It's shorter than "Eating us out of house and home."

Seriously, he's always hungry! It wasn't that long ago that, after eating out, he would ask on the way home, "What's for supper?" I can't imagine how much he'll eat when he's a teenager. He already eats more than me.

Josiah: When it's my birthday, I want to go to Outback so I can have a bacon cheeseburger!

He's talking about eating the adult-sized burger; he has ordered and finished this burger before. Did I mention he's only 7? There's a reason for the "Burger Boy" nickname...

And it's entirely possible that between now and the end of June, he will decide to go to Chuck E. Cheese instead. But a mother can hope, right?
Posted by Amy @ Cheeky Cocoa Beans

Email ThisBlogThis!Share to TwitterShare to FacebookShare to Pinterest
Labels: Overheard

He put the clothes on OVER his other clothes??! Boys are so silly!!

I too am wondering how we are going to pull this off when our boys are teenagers. Where do you they put it all? Obviously it all gets burned off climbing walls, jumping anything in their path, running a hundred miles an hour...