This post is from October 2009--yet another flashback for you.


When we went to Savannah for Michael and Brandi's wedding, it never even occurred to me how confusing a downtown area could be. On the way from the hotel to the church for the rehearsal, our GPS had a nervous breakdown and began asking questions such as, "Did you go inside?" "Are you still in Georgia, USA?" "Do you still love me?"

Yeah, I made up that last one, but the others were just so funny...especially since we were running late to the rehearsal and needed the GPS to be clear-headed enough to just do it's job instead of constantly asking for reassurance.


We checked into our hotel around 5:15 p.m. after stopping something like 50 times on the way and, after feeding the kids a little something, changing into appropriate clothes, and dropping the kids off at Dad and Kathleen's hotel, we were (not surprisingly) late to the rehearsal which started at 6:00 p.m. I was "Reader #1" in the ceremony, so my part to practice had already passed...which was probably just as well because I walked into the sanctuary and saw this 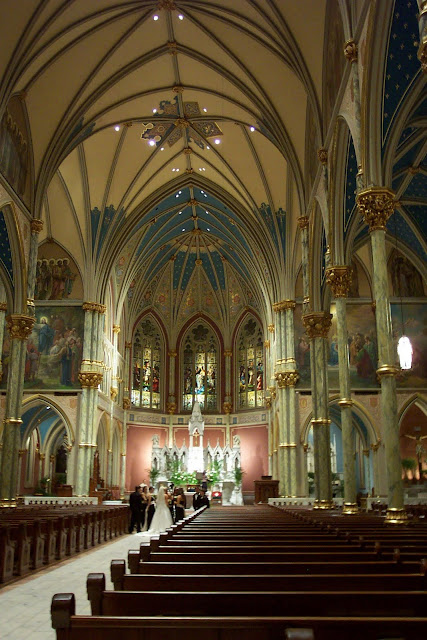 and wondered how I could get someone else to read for me. Seriously, what made me agree to do the reading?!  Oh, yeah...'cause I love my cousin.  :)


Want to see more photos of the wedding or of the cathedral?  Click on these links:


The Cathedral of St. John the Baptist