You Get What You Pay For

Or, rather, "You gripe about what you don't even have to spend money on because you are 14."

This is what I found one morning when I opened our pantry. Robert (14) had critiqued our bread...The label now reads "'Healthy' White Blandwich Bread." 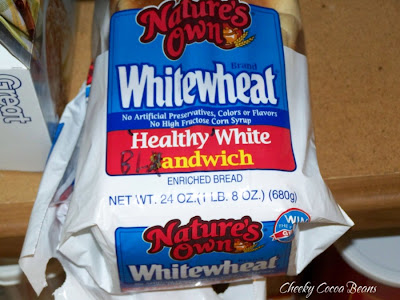 Yes, "Healthy" is in quotes. I guess Robert already doesn't trust food labels, and yet he shamelessly copies a mayonnaise commercial's use of the made-up word "blandwich."

Note: I don't buy "good" cereal (by his standards) because it lasts somewhere between 2 and 3 mornings around here.

This next shopping list, though, is by far my favorite one. Robert (whose real name starts with an "N") had made a list of things he needed/wanted. I added "N's this, N's that" to the list--you know, before he could think of any other "needs." He wrote his response to my addition, and I added my response, too, trying to mimic his handwriting. 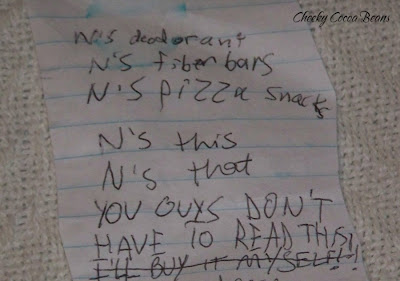 Hmmmm...wonder why he scratched out that part? ;)
Posted by Amy @ Cheeky Cocoa Beans