A comedy of errors

I found this partially written post in my drafts folder from late September...and I decided to finish it.

OK, so I had been pricing things and searching for more items around here that I could add to the things I'm consigning, and my drop-off day arrived on Tuesday. Jason had offered to stay with the younger two while Robert (13) and I took the load to the consignment sale, and I had the minivan loaded up and ready to go when he walked in the door. We left with plenty of time to get there...and then noticed the gas light was on. Ugh. I stopped for gas, and then the fun began...

When I started the van, it started shaking...and with a car load of clothes on hangers and boxes full of stuff, it was a loud kind of shaking! I cautiously left the parking lot (bad gas?) and drove up the road to a nearby church where I could pull into the parking lot (read: in case we needed a tow truck) and called Jason. The "check engine" light was flashing. My first thought? That must be really bad. (It is. But not as bad as it could have been.) The owner's manual lists warnings about the damage it could do to the engine as well as the risk of fire. I was sufficiently scared and decided to drive back home, trying to drive as "moderately" as I could, as suggested by the manual to avoid, you know, fire. We threw everything into the truck and Robert and I hit the road again.

And the gas light came on. Seriously?! "This is crazy!" I exclaimed, shaking my head in disbelief. Robert added, "...and a little funny." I didn't want to take my chances on (possibly) bad gas, so I drove a little before stopping for gas. I certainly didn't want to push it, though, because apparently if there was ever going to be a time that I run out of gas, it would have been during this trip.

The rest of the drive to the consignment sale was uneventful and, during one blissful part, traffic-free. We had to put most of our items on the sales floor in the hottest building I've been in in a while because they were short-handed with help. All in all, we were gone from home for over two hours.

And you know that playpen I was determined to sell this time around, since I had forgotten to price it? I left the tag (which I was going to attach after I assembled it) in the van when we switched vehicles. Ugh. So, on CraigsList it will go. (Which is what my aunt suggested in the first place.)

I was disappointed because although I sold about half of my things, I really didn't sell as much as I'd hoped. Good stuff already gone? Nobody wants my kids' clothes? I don't know...but still I made a little more money and have fewer things around the house, so I can't complain. The combined total from both consignment sales was, ironically, exactly enough to cover replacing our water heater that died last month. 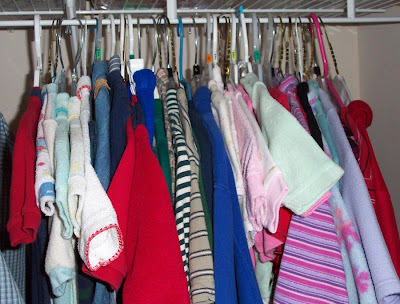 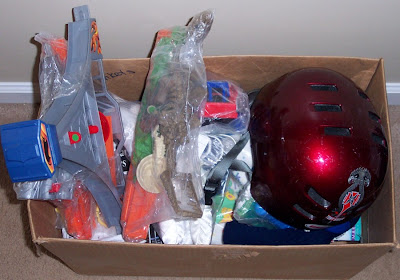 Let me know if you want any of it... ;)
Posted by Amy @ Cheeky Cocoa Beans

Shirley could use the red helmet*