You would have thought we'd announced we were going to Disney. We went to the Boom Da Yada church on our way to our final destination, Gatlinburg. The kids...well, Josiah and Grace...launched into their own variations of the "I Love My Church" song, and then the lyrics about orange cones morphed into a variation of a quote from the movie Underdog...

With all the movie references that go on around here, you'd think we didn't limit their screen time in any way. We do--just ask them--and according to them, their friends watch TV and play on the computer any time they want to. Oh, our poor, deprived children.

After the church service:

Me: What was your class about?

Me: Do you mean Boaz? Boaz and Ruth?

Grace [giggling]: Oh! I thought it was Zoab!

We stopped at the Tennessee Aquarium in Chattanooga to break up the trip to Gatlinburg. As we were walking towards the aquarium:

Grace: That's the biggest fish in the world!

She said that at least ten times during our walk through. 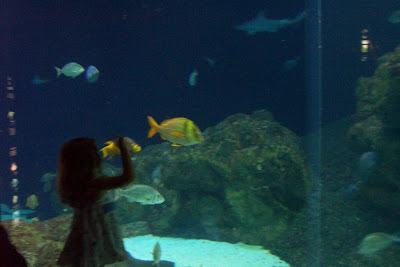 Grace was disappointed that she didn't get to "pet" some of the "big fish," like these sturgeons. Her arms just weren't long enough to reach them in the tank. 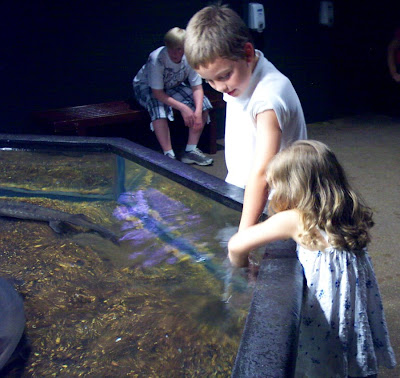 Then, after the aquarium, we began the long drive towards Gatlinburg...and the whining began, too.

Josiah: How much longer? Can't we go any faster?

Me: We're driving as fast as we can. We can't go any faster.

Grace [in her 4 year old, matter-of-fact way]: Oh, yes, you could go faster...but then you'd go to jail. [Totally seriously, and throwing up a hand for emphasis] Don't do it.

Josiah [mustering all the drama he could while apparently being severely dehydrated]: We can't survive out here without water!!!

Ummm...we were just outside Knoxville. It's not exactly a desolate area. And later...

Josiah [turning up the whining to an all-time high]: I'm cold. I'm thirsty. And how much longer? We've been driving all day. [He paused, suddenly remembering the go carts that were waiting ahead of us, and immediately perked up ever-so-briefly] Hey! I remember the go carts! This is the best place for vacation!

Josiah is like a box of chocolates...You never know what you're gonna get.

Josiah explains everything to Grace...whether he has all of the facts or not. He will even explain breakfast to his little sister:

Jason commented that I have totally flipped their way of thinking--breakfast is supper, black is white--all because we have "breakfast" for supper occasionally.

While we were near Sevierville, we went to a minor league baseball game. It was great! We paid a total of $40 for all five of us to get in, we had awesome seats even though we walked up to the ticket booth minutes before the game began, 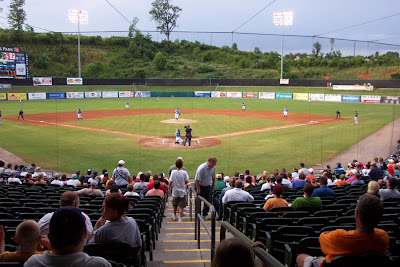 That's Robert walking down the steps on the left. We were in the 6th row directly behind home plate.
and it was a great game, even if I didn't know which team was the Tennessee Smokies until after the game got underway. ;)

I got one pretty good shot of Robert during the game 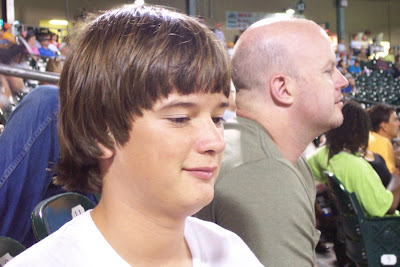 where he wasn't (a) avoiding the camera or (b) making his usual goofy faces for the camera. 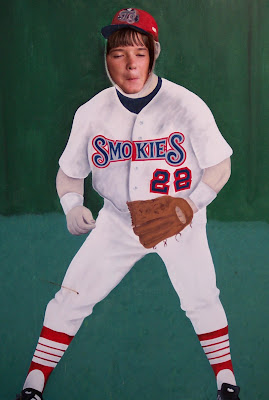 Grace [studying the mascots on the upper level of the stadium]: I bet they got those bears from Chuck E. Cheese. Chuck E. Cheese has, like, a hundred bears. 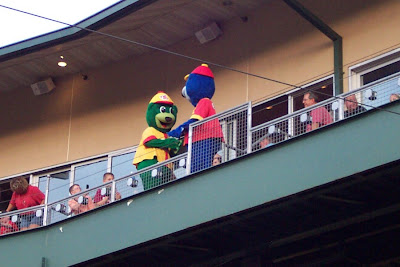 Well, apparently Josiah has not explained to Grace that Chuck E. Cheese is a mouse.

Jason [observing the vehicles around him as we drove through the curvy mountain roads]: It's like minivan NASCAR!

At this particular time, the only thing you could see on our stretch of road were minivans--there were 2 in front of us, 1 beside us, and 1 behind us. It was just a little bizarre, really.

Jason [shaking his head]: This is just wrong.

What was so wrong? His petite 4 year old daughter driving a go cart for the first time. :) She could barely touch the pedals, but she drove like a pro after a few times around the little track! 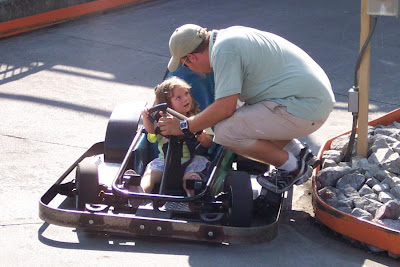 Getting crucial instructions like "Don't push down on both pedals at the same time." 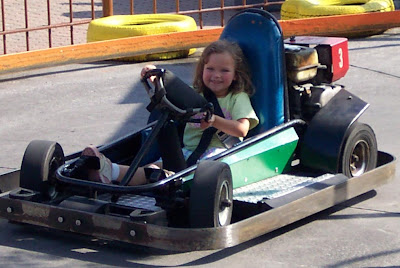 It must be all those years of experience driving the grocery store "car" shopping carts...

Click here to check out my giveaway for a chance to win 100 professionally printed, totally customized postcards!

Zoab!? Wasn't he the villain in Toy Story fighting Buzz??