Jason: This whole parenting thing would be a whole lot easier if it weren't for the kids.

Josiah: Can I get drums? 'Cause Robert has a guitar, and I could play drums, and Grace could sing and we could have our own band.

Grace: No, I want to play drums!

They went back and forth about this way too long...especially since this conversation happened in the car. A few days later, Josiah did a recap of his plans for a band in Robert's hearing (since he was not in the car at the time of the above conversation). His reaction?

Robert [jaw dropping slightly as he stares at his younger brother]: What are you talking about?

That's too bad. Josiah already had band names picked out months ago:

Josiah: When I get a band, I'm gonna name it after Superchick: Super-ham...or Super-turkey.

Josiah [matter-of-factly, to Jason]: Know what you haven't given Robert in a while? Beer.

You should have seen the looks on Jason's and my face! Can you imagine? But what Josiah was really talking about was a little game Jason would play with the boys where he "gave them beard" by (lightly) scrubbing his face on theirs. Josiah routinely mispronounces things, like saying "root beard," though not as often nowadays. And WE HAVE NEVER GIVEN OUR CHILDREN BEER!

Josiah: The dads are usually smarter than the moms. I don't know why, but it just usually works out that way.

This was what Josiah reportedly told his Sunday School teachers on Sunday. Sigh...

Me: Josiah, clean up your room.

I give him some time to get busy, and then go to check on his progress. This is what I find: 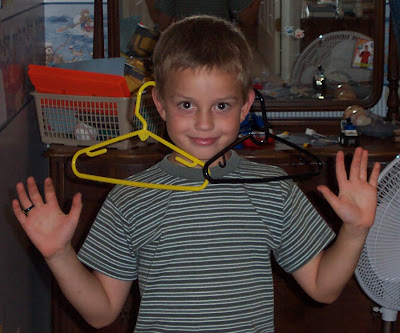 Please note: This child with the clothes hangers hanging from his ears is the same child who was passing judgement on the intelligence of parents.

Oh my oh my Amy! You have your hands full! I look to see them on the television in a few years where they have created that band that are discussing so much! Cant wait! Very cute story!

Oh I love the caption under the photo of Josiah too where the parents have little intelligence but look at what he is doing! He! He! :)